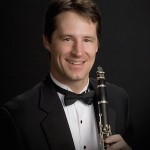 George Stoffan has taught at NEMC since 2015.  He has performed in the Czech Republic, Belgium and Germany, Canada, and throughout the United States.  As a Fulbright Award recipient, he was artist-in-residence at the Janacek Academy of Music in Brno, Czech Republic in the fall of 2012.

Stoffan performed in eight national tours as Principal Clarinetist and Concertmaster of the United States Air Force Band in Washington D.C.  With this ensemble, he has appeared as soloist on several occasions, and performed in fourteen recordings. His recording, A Postcard from Europe, featuring contemporary East European clarinet music, in addition to the Brahms Sonata No. 2, Op. 120, in E-flat Major, was characterized by the Detroit Free Press as benefiting from “Stoffan’s warm expression and confident attack,” and The Clarinet cited “Stoffan’s performance of the Brahms with technical ease and great expression of the works, warm, passionate lines.”