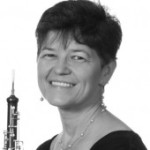 She has also performed in orchestras outside of the State of Arkansas such as the Knoxville Symphony, TN, the Orquesta Sinfonica de Estado de Mexico and Orquesta Sinfonia de Jalapa in Mexico. As a soloist Dr. Duso Kitts has performed Eric Ewazen’s Down a River of Time with the Arkansas Symphony String Quintet at the William Jefferson Clinton Presidential Library, River Rhapsody Chamber Music Series, and she was a soloist with other ensembles, such as the Pine Bluff Symphony (AR), Fuzhou Philharmonic Orchestra in Fuzhou, China, and the Little Rock Wind Symphony. In August 2018, she performed Eric Ewazen’s Down a River of Time with the Orquesta Ciudad de Granada String Quintet at the International Double Reed Society Conference in Granada, Spain. Dr. Duso has premiered works by John Steinmetz, Chris Theofanidis, Matt Quayle, Stefanie Berg and Paul Dickinson with members of the Arkansas Symphony double reed trio, DDG Trio (Duck, Duck, Goose). Dr. Duso has been teaching at NEMC since the summer of 1999. She received her Bachelor of Music degree in Oboe Performance from the Indiana University, her Master of Music degree in English horn and Oboe Performance from Manhattan School of Music and her Doctorate of Musical Arts degree in Oboe Performance from the University of Michigan. Her teachers include Jerry Sirucek, Joseph Robinson, Tom Stacy and Harry Sargous.