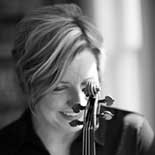 After graduating from the Interlochen Arts Academy, she went on to study with Linda Cerone, Victor Danchenko and David Russell at The Cleveland Institute of Music, earning undergrad and graduate degrees. While in college, Tracey attended Encore School for Strings, as well as chamber music programs with the Audubon Quartet, the Cavani Quartet, and the Weilerstein Duo. She was awarded a Fulbright grant for violin study in Berlin, Germany, where she attended the Hochschüle der Musik and toured around Europe performing both as a recitalist and an orchestra member.