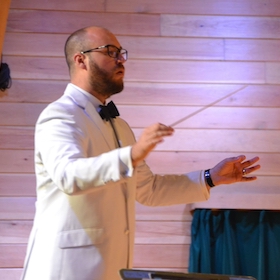 He has previously held teaching positions at elementary and middle schools in Pennsylvania and Delaware. In addition to teaching, Mr. Burkhart is a performer in the Delaware Brass Quintet and Delaware Winds. He also served in the 78th Army Band where he directed the 78th jazz ensemble and performed in the brass quintet. He has studied jazz and classical trumpet performance with Sean Jones, Roger Sherman, John Thyhsen and Rodney Marsalis. Since 2016, Mr. Burkhart has conducted the concert band at New England Music Camp.  He was also a counselor and a camper at NEMC.