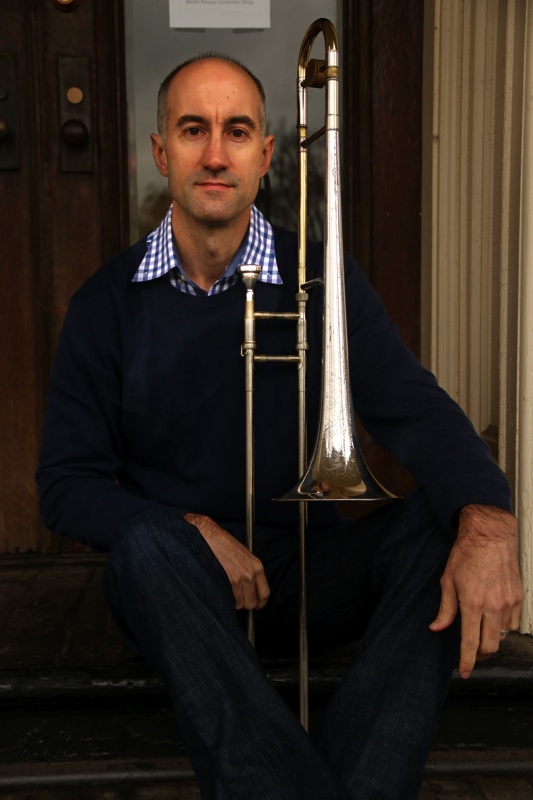 3-time GRAMMY-nominated trombonist-composer-arranger Alan Ferber has been called “one of the jazz world’s premier composers and arrangers for larger groups” by All About Jazz NY. Jazz Times magazine describes Ferber’s compositions as “inspired and meticulous” and the L.A. Weekly deems him “one of the premier modern jazz arrangers of our time.” For the last seven years, he has been recognized as one of the leading trombonists of his generation in Down Beat magazine’s International Critics’ Poll and Readers’ Poll.

He is currently co-director of the BMI Jazz Composers Workshop in New York City. Since 2011, he has been an Adjunct Professor of jazz studies at New York University’s Steinhardt School. Ferber's aesthetic prescribes a deep knowledge of the jazz tradition as a means toward meaningful innovation. Appropriately, the Wall Street Journal describes his music as “somehow both old school and cutting edge.” He has released eight albums as a bandleader, most recently, Jigsaw, for 17-piece big band (Sunnyside Records 2017). Down Beat magazine listed it as one of the best CDs of 2017 and stated, "Ferber...demonstrates full mastery. His big band belongs in the idiom's current top tier." Jigsaw was nominated for a 2018 GRAMMY award for 'Best Large Jazz Ensemble Album.' Prior to Jigsaw, Ferber released “Roots & Transitions” in 2016, an eight-movement original piece for his working nonet, from which his composition Flow was nominated for a 2017 GRAMMY award for 'Best Instrumental Composition. 'Ferber's 2013 release for his big band on the Sunnyside label, March Sublime, features original compositions and arrangements and was nominated for a 2014 GRAMMY award in the ‘Best Large Jazz Ensemble Album’ category. In 2010, Ferber released “Chamber Songs-Music For Nonet & Strings” (Sunnyside) which received a coveted 4 star review in Down Beat and was named one the magazine’s “Best CDs of the Year.”

He has worked extensively in other genres as well with artists including Peter Gabriel (Live at the Ed Sullivan Theater), Paul Simon (Stranger to Stranger), Sufjan Stevens (Age of Adz & All Delighted People), The National (on GRAMMY-nominated Trouble Will Find Me), Dafnis Prieto (on GRAMMY-winning Back To The Sunset for Best Latin Jazz Album), Dr. Dre, Harry Connick Jr, Michael Buble, and Beirut. His discography lists over 200 CDs on which he has played trombone and/or composed and arranged music.

Ferber’s accomplishments as a writer are equally diverse. Ferber was the recipient of a 2013 New Jazz Works grant from Chamber Music America, funded by the Doris Duke Foundation. The resulting work was the critically acclaimed eight-movement piece for nonet titled “Roots & Transitions.” In 2018, he was named the 53rd Commissioned Composer for the University of Wisconson River Falls, joining a distinguished list of composers that includes John Cage, Julia Wolfe, and Anthony Braxton. His recent work as a composer-arranger include ten 17-piece big band arrangements for Broadway star Shoshana Bean's new album, Spectrum; Two big band arrangements of Joni Mitchell compositions featuring vocalist Tutu Puoane with the Brussels Jazz Orchestra on their album, We Have A Dream (Soulfactory Records 2018). Two commissions ~ Kopi Luwak and Luteous Pangolin (Ben Monder) ~ written for the Atlantic Brass Quintet (and released on their 2014 album Crossover on Summit Records); Big Band arrangements of I Sing For You (Nancy King) and I Get Along Without You Very Well (Hoagy Carmichael), featuring GRAMMY-nominated violinist Sara Caswell and her sister, vocalist Rachel Caswell with the JazzMn Orchestra; Hyperballad (Bjork), arranged for the avant-classical music outfit Bang On A Can’s Asphalt Orchestra; Farewell (Nelson Foltz) arranged for a recording with 8 trombones joined by vocalist Rebecca Martin; nine arrangements for Korean pianist Youngjoo Song’s release, Reflection (Sony Music), nominated for Jazz Album of the Year at the 2015 Korean Music Awards.