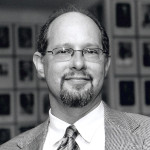 Edward Jacobs began playing violin at age 8, but abandoned that at age 11 upon hearing a friend’s jazz quartet in favor of the saxophone. Undergraduate work at the University of Massachusetts, Amherst in jazz performance, and then in composition ( Salvatore Macchia, Robert Stern ) was followed by graduate study at the University of California, Berkeley in composition ( Andrew Imbrie, Olly Wilson, Gerard Grisey ) and a doctorate at Columbia University with Mario Davidovsky, Chou Wen-Chung, Marty Boykan and George Edwards.

Although the bulk of his music is not “electronic”, since 2001 Jacobs began to include electronic media in some of his works. He has since written pieces for computer-generated sound with clarinet (A Function of Memory, 2001, Beauty Shop, 2005), with cello (al momento, 2002), piano (echoes, shadows, 2008), and for dancers (dis/Connect, 2004) and, most recently with voice (The Line Between, 2011).  His music is published by C. F. Peters Corp., NY, ACA and APNM.  Recordings of Aural History (clarinet & piano), and A Function of Memory are available on Open G Records and Passed Time (brass quintet) is forthcoming on 8Bells.  In 2005 Jacobs’ work as a composer was recognized by a Charles Ives Award of the American Academy of Arts & Letters.

The Academy’s citation reads “Jacobs’s music masters the ‘virtual’ and ‘real’ sound habitats and embeds them into a unified and consistent single space with grace, broad orchestral imagination and expressivity.  Jacobs’s music is immediately engaging, attractive and intellectually demanding.”

Jacobs began teaching at East Carolina University in 1998, where he has received two Research/Creative Activity Grants, as well as a Teacher-Scholar Award.  His activities have also included the founding and direction of the North Carolina NewMusic Initiative (formerly the NewMusic@ECU Festival), begun in March, 2001; and work in the Pitt County Public Schools, collaborating 2004-2008 with middle school general music teachers in his “Young Composers Project”, which sought to make the creation of music a fundamental part of our children’s education.

The improv sessions really helped me see hear music in a new way. I also loved listening to everyone else's music -- new sounds are always inspiring. The chamber readings and percussion collaborations were especially helpful, and I learned a lot about working with performers.