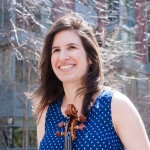 Violist Hannah Levinson is an active performer in New York City, devoted to performing music of the past 50 years. She is a founding member of the violin/viola duo andPlay, an ensemble that works to commission new works and perform lesser-known works for their instrumentation. She has worked with contemporary music groups such as ACME, ensemble mise-en, Talea Ensemble, Contemporaneous, North/South Consonance, and The Rhythm Method Quartet. Hannah also performs traditional classical repertoire regularly and is a member of the Albany Symphony Orchestra.

Recent highlights include performances at the NUNC!2 Conference at Northwestern University, the New Music Gathering at Peabody Conservatory, seven andPlay premieres, and her orchestral debut with the Edgewood Symphony Orchestra (Pittsburgh, PA). She can be heard on recent recordings with Numinous, Mimesis Ensemble, and the band all boy/all girl. Hannah was a member of the Lucerne Festival Academy Orchestra in 2012/13 and also a musician at the Lake George Music Festival, where she performed Brahms String Sextet, No. 1, Op. 18 with David Kim.

​Based in New York City, Hannah is an active teacher, and is on faculty at Western Connecticut State University. She completed her MM in contemporary performance at the Manhattan School of Music, and graduated from Oberlin College and Conservatory with degrees in both Russian and East European studies and viola performance. Hannah is currently pursuing a PhD in performance at NYU Steinhardt, studying with Artist Faculty member Karen Ritscher. She also studied with Martha Strongin Katz and Nadia Sirota.