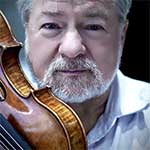 Violinist Daniel Phillips enjoys a versatile career as a veteran chamber musician , soloist , violist, and teacher. A graduate of Juilliard, his teachers were his father Eugene Phillips, Ivan Galamian, Sally Thomas, Sándor Végh and George Neikrug. He is founding member of the 35-year-old Orion Quartet, in residence at the Chamber Music Society of Lincoln Center in New York City. Available on recording are the complete quartets of Beethoven and Leon Kirchner. He won the Young Concert Artists auditions and bronze medal in the Leipzig Bach Competition in 1976, and has been an up and coming young soloist ever since. He gave debut recitals at the 92nd street Y and Alice Tully Hall which received great reviews in the NYTimes. He has performed as soloist with the Pittsburgh, Houston , Boston and Yakima Symphonies and has been a regular at Spoleto, Santa Fe Chamber Music Festival and the International Musicians Seminar in the UK for the last four decades and is a senior artist at the Marlboro Music Festival. He teaches at the Aaron Copland School of Music at Queens College, Bard College Conservatory, and Juilliard. He lives with his wife, flutist, Tara Helen O’Connor with their two cute mini dachshunds on the upper west side of Manhattan.