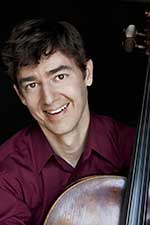 Cellist Clancy Newman has enjoyed an extraordinarily wide-ranging career, not only as a cellist, but also as a composer, producer, writer, and guest lecturer. He received his first significant public recognition at the age of twelve, when he won a Gold Medal at the Dandenong Youth Festival in Australia, competing against contestants twice his age. He went on to win first prize at the Naumburg International Competition, and he has performed as soloist throughout the United States, as well as in Europe, Asia, Canada, and Australia. A recipient of an Avery Fisher career grant, he can often be heard on NPR’s “Performance Today” and has been featured on A&E and PBS. As a composer, he has expanded cello technique in ways heretofore thought unimaginable, particularly in his "Pop-Unpopped" project, and he has been featured on series by the Chamber Music Society of Lincoln Center and the Chicago Chamber Musicians. In March 2019 his piano quintet was premiered at the opening ceremony of the National Cherry Blossom Festival in Washington DC, and in 2021 he was commissioned by the Kingston Chamber Music Festival to produce four educational videos to assist school teachers as they navigate the covid-19 pandemic. Mr. Newman is a graduate of the five-year exchange program between Juilliard and Columbia University, receiving a M.M. from Juilliard and a B.A. in English from Columbia.