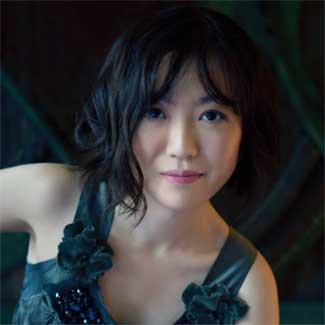 At the age of thirteen, Ms. Aizawa was brought to the attention of conductor Alexander Schneider on the recommendation of the pianist Mitsuko Uchida. Schneider engaged Ms. Aizawa as soloist with his Brandenburg Ensemble at the opening concerts of Tokyo's Casals Hall. Later that year, Schneider presented her in her United States début concerts at the Kennedy Center and Carnegie Hall with his New York String Orchestra. She has since established her own unique musical voice.

Ms. Aizawa is also an active chamber musician. The youngest-ever participant at the Marlboro Music Festival, she has performed as a guest with string quartets such as the Guarneri Quartet and the Orion Quartet. She is a founding member of the Horszowski Trio and of the prize-winning Duo Prism. Ms. Aizawa became artistic director of the Alpenglow Chamber Music Festival in Colorado in 2010.

Recently, Ms. Aizawa’s solo debut recording of Scriabin’s and Shostakovich’s “24 Preludes” was released by Altus in Japan, and her second album of Messiaen's and Faure's preludes is coming out in the upcoming season.  Ms. Aizawa also has a great interest in exploring unusual repertoire. - the St. Paul Pioneer Press said of her performance with the St. Paul Chamber Orchestra conducted by Hans Graf: "the Salieri Piano Concerto in C was played so splendidly by Rieko Aizawa. Hers was a graceful reading. .... Aizawa's performance lent the work a respect it rarely receives." In the same year, she received the Washington Award.

Ms. Aizawa was the last pupil of Mieczyslaw Horszowski at the Curtis Institute and she also studied with Seymour Lipkin and Peter Serkin at the Juilliard School. Ms. Aizawa lives in New York City, and she is on the faculty at Longy School of Music of Bard and at Brooklyn College. Ms. Aizawa is a Steinway Artist.