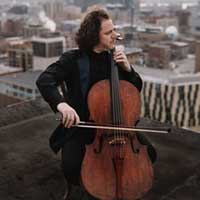 Renowned as a musical pioneer, cellist Matt Haimovitz is praised by The New York Times as a “ferociously talented cellist who brings his megawatt sound and uncommon expressive gifts to a vast variety of styles” and by The New Yorker as “remarkable virtuoso” who “never turns in a predictable performance.” He has inspired classical music lovers and countless new listeners by bringing his artistry to concert halls and clubs, outdoor festivals and intimate coffee houses – any place where passionate music can be heard. Alongside a relentless touring schedule, he mentors an award-winning studio of young cellists at McGill University’s Schulich School of Music in Montreal.

Haimovitz made his debut in 1984, at the age of 13, as soloist with Zubin Mehta and the Israel Philharmonic. At 17 he made his first recording with the Chicago Symphony Orchestra, for Deutsche Grammophon. Haimovitz made his Carnegie Hall debut when he substituted for his teacher, the legendary Leonard Rose, in Schubert’s String Quintet in C, alongside Isaac Stern, Shlomo Mintz, Pinchas Zukerman and Mstislav Rostropovich.

The solo cello recital is a Haimovitz trademark, both inside and outside the concert hall. In 2000, he made waves with his Bach “Listening-Room” Tour, for which, to great acclaim, Haimovitz took Bach’s beloved cello suites out into the clubs across the U.S., Canada, and the U.K. Haimovitz’ 50-state Anthem tour in 2003 celebrated living American composers and featured the cellist’s own arrangement of Jimi Hendrix’s “Star-Spangled Banner.” He was the first classical artist to play at New York’s infamous CBGB club, in a performance filmed by ABC News for Nightline UpClose.

Haimovitz’ recording career encompasses more than 20 years of award-winning work on Deutsche Grammophon and his and composer/producer Luna Pearl Woolf’s own trailblazing independent label Oxingale Records, now in collaboration with PENTATONE. Haimovitz revisited the Bach cello suites in 2015 with the release of The Cello Suites According to Anna Magdalena, which was followed by 2016’s Overtures to Bach, featuring six new commissions that anticipate and reflect each of the cello suites. Both albums were among the credits for David Frost, for his 2016 GRAMMY® win for Best Classical Producer. Recent recordings for the PENTATONE Oxingale series include TROIKA, an all-Russian program from Rachmaninoff to Pussy Riot, with his longtime duo partner, pianist Christopher O’Riley, and ISANG YUN: Sunrise Falling with the Bruckner Orchestra and conductor Dennis Russell Davies, commemorating the 100-year anniversary of the composer's birth. Haimovitz’s recordings of Philip Glass’s Partita No. 2 for Solo Cello, and Cello Concerto No. 2, “Naqoyqatsi,” with the Cincinnati Symphony and Dennis Russell Davies, on Glass’s Orange Mountain Music label, have been widely acclaimed.

In 2006, Haimovitz received the Concert Music Award from ASCAP for his advocacy of living composers and in 2004, the American Music Center awarded Haimovitz the Trailblazer Award. Born in Israel, Haimovitz has also been honored with the Avery Fisher Career Grant (1986), the Grand Prix du Disque (1991), the Diapason d’Or (1991) and was the first cellist to receive the Premio Internazionale “Accademia Musicale Chigiana” (1999). Haimovitz studied at the Collegiate School in New York and at the Juilliard School, in the final class of Leonard Rose, followed by cello studies with Ronald Leonard and Yo-Yo Ma. In 1996, he received a B.A. magna cum laude with highest honors from Harvard University. Matt Haimovitz plays a Venetian cello, made in 1710 by Matteo Gofriller.