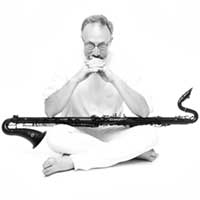 Michael Lowenstern, widely considered one of the finest bass clarinetists in the world, has performed, recorded and toured as a soloist and with ensembles of every variety.

Lowenstern has written music for concert, film, dance and various other new media over the span of his 25-year career. His performing credits include tenures with groups as diverse as the Orpheus Chamber Orchestra, Steve Reich Ensemble and The Klezmatics. To date he can be heard on over fifty CDs, including six solo recordings of his own.

Not satisfied with the status-quo in music education, Michael’s irreverent and somewhat controversial YouTube series has become a source of information and edutainment for millions of viewers across the globe. And when he’s not teaching via the internet, he’s traveling regularly as a guest lecturer at universities across the world. When he’s stuck in New York, Michael serves on the faculty of the Manhattan School of Music and the Juilliard School.

He lives in Brooklyn with his wife, Katherine. His kid is somewhere in Michigan attending some state school with a big blue football team.