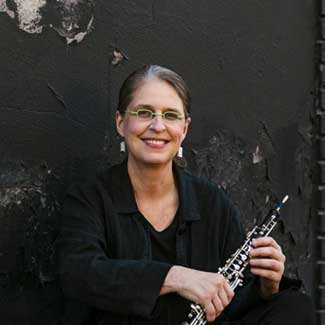 Oboist, Jacqueline Leclair, is Associate Professor of Oboe, Woodwind Area Chair, and Associate Dean of Academic and Student Affairs at the Schulich School of Music. She is a member of the ensembles Signal and Sequitur, and can frequently be heard performing solo and chamber music concerts internationally. Dr. Leclair was on the faculty of the Manhattan School of Music (NYC) and was Assistant Professor of Oboe at Bowling Green State University (Ohio) 2007-2012. During her last two years at BGSU she also served as the Director of the MidAmerican Center for Contemporary Music.

In addition to performing a variety of classical and other musics, Dr. Leclair specializes in the study and performance of new music. She has premiered many works, and regularly presents classes in contemporary music and its techniques at schools such as UCLA, the Eastman School of Music, Brigham Young University, The North Carolina School for the Arts, and the University of California in San Diego.
Dr. Leclair has recorded for Nonesuch, CRI, Koch, Neuma, Deutsche Grammophon and CBS Masterworks, receiving critical acclaim in particular for her premiere recording of Roger Reynolds’ Summer Island. She is the editor of Universal Edition’s Sequenza VIIa by Luciano Berio. And her recently published, and already acclaimed book about the oboe is: Oboe Secrets: 75 Performance Strategies for the Advanced Oboist and English Horn Player.

Originally from Syracuse NY, Dr. Leclair presently resides in Old Montreal, Quebec. Her musical studies were at the Eastman School of Music and SUNY Stony Brook where her oboe mentors were Richard Killmer and Ronald Roseman.