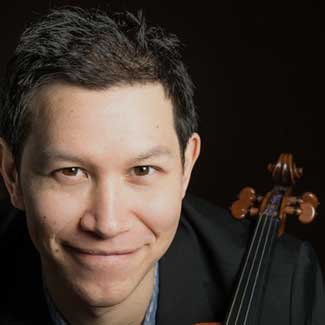 As an active recitalist, he has been featured on the Boston Celebrity Series, Mohawk Trail Concerts, Electric Earth Concerts, and Longy School of Music’s Modern American Music Concert Series’. As featured soloist with orchestra, Mr. Eng has performed with the Hart House Orchestra of Toronto, Cornell Symphony Orchestra, and the Lyrica Chamber Orchestra. As a chamber musician, Mr. Eng has collaborated with world-renowned artists including Elmar Oliveira, Eugene Drucker, Terry King, and Victor Rosenbaum. He has made festival appearances at Spoleto, Orford, Domaine Forget, Killington, the Scotia Festival, the Quartet Program at Bucknell University, and the St. Lawrence String Quartet Seminar at Stanford University. He has performed and taught in Bermuda, China, France, Germany, Greece, Japan, and all over North America.

In 1998, Andrew received his A.R.C.T. Performer’s diploma from the Royal Conservatory in Toronto, Canada, and then in 2003 and 2005 respectively received his Undergraduate Diploma in Performance and Master of Music in Modern American Music at the Longy School of Music as a student of Laura Bossert.