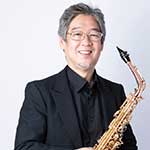 After graduating from Kunitachi College of Music, Tokyo Japan, he completed his graduate studies at Northwestern University. In 1984, he made his recital debut in Tokyo. Participated as an instructor at the FLHSI 2015. In 2016, he was a visiting professor at Indiana University in conjunction with Professor Otis Murphy's sabbatical leave. In 2017, invited to perform and give a master class at the United States Navy Saxophone Symposium. In 2018, invited by the North American Saxophone Alliance to perform and give a master class. In 2020, he accompanied the Vienna Philharmonic Orchestra conducted by Valery Gergiev on their Japan tour as a guest performer. Solo CD  "Tone Studies" (specially selected by Record Geijutsu magazine and nominated for the 56th Record Academy Prize). He is a professor at Kunitachi College of Music Graduate School. He is the leader of the "Masato Kumoi Sax Quartet".