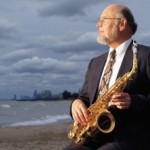 Hemke has been a Distinguished Visiting Professor at the Conservatoire National de Musique, Paris; the Sweelinck Conservatory of Music, Amsterdam; and the Basel Conservatory of Music in Switzerland. He is a consultant to the La Voz Corporation, which manufactures his signature saxophone reed, and the Selmer Company of Elkhart, Indiana, and serves as an editor for the Southern Music Company. Hemke has released numerous solo albums and has appeared as a soloist on other recordings. He has also appeared as a saxophonist on six recordings with the Chicago Symphony Orchestra. In 1956, he became the first American to receive the Premier Prix du Saxophone from the Conservatoire National de Musique, Paris. Hemke holds degrees from the Eastman School of Music and the University of Wisconsin. He has been professor of saxophone at Northwestern University since 1963 and serves as Louis and Elsie Snydacker Eckstein Professor of Music and Charles Deering McCormick Professor of Teaching Excellence in the School of Music.