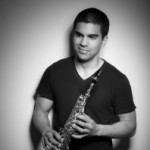 To this end, the Amethyst Quartet has garnered first prizes at the Fischoff, Coleman, and MTNA chamber music competitions. As a soloist, Sean has played concerti with the Northwestern Symphonic Wind Ensemble, Northwestern Chamber Orchestra, Northwestern Movie Music Ensemble, and Simpson University Symphony Orchestra. His performances of Ingolf Dahl’s Concerto and Jacques Ibert’s Concertino da Camera have aired on Chicago’s WFMT and Public Radio International, respectively.
Sean was invited as guest lecturer and clinician of saxophone to Stanford University, University of the Pacific Music Conservatory, Los Medanos Community College, Morehead State University, Vandercook College of Music, Marshall University, and Simpson University. In the fall of 2009, Sean began his doctorate in the musical arts at Northwestern University.