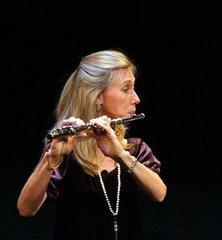 Flutist Dominique Soucy is an active teacher and performer in the New York City area. As a winner of the Montreal Symphony Competition, The Canadian Music Competition and Artist International in New York, she has performed in most major halls in New York, Washington and Canada.

Ms. Soucy’s playing has been described as “a treat” with “an impressive technique and brilliant tone, remarkable, passionate and confident” by The Washington Post, The Montreal Gazette and The Winnipeg Free Press. She has collaborated with such artists as John Cage, George Crumb, Elliott Carter and Bruce Saylor, and Canadian composer Pat Carrabre. As an orchestral player, she has performed with The London Ballet at the Metropolitan Opera, New York Chamber Orchestra, the Toronto Ballet, Les Grands Ballets Canadiens and New York Pro Arte Orchestra. She also was a member of The New Music Consort and The New York Bach Soloists for several years. She recorded numerous broadcasted recitals for CBC in Canada, performed on Good Morning America on the ABC network, and recorded the movie score for Mac by Richard Termini and Dancing Bird by Thad Wheeler. Ms. Soucy received a Premier Prix à l’unanimité du Jury, from the Conservatoire de Musique du Québec in flute and in chamber music. She also completed The Orchestral Training Program at The Royal Conservatory of the University of Toronto. She studied with Julius Baker, Jeanne Baxtresser and Jean Morin. As a flute instructor she has served on the faculty at City College of New York, Crestwood Music Education in Westchester, Rye Country Day School, Festival International de Lanaudière, and at the New England Music Camp.