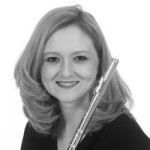 Sarah M. (Gill) Schettler plays Second Flute in the Louisiana Philharmonic Orchestra, teaches flute lessons at Tulane University and the University of New Orleans, and maintains a private studio where she teaches students from beginner through high school students.

Before moving to New Orleans, Dr. Schettler served as Assistant Professor of Music at Texas A&M University-Kingsville, where she taught flute and music theory. She has performed with the Corpus Christi and Victoria Symphonies in south Texas and with the Orquestra Sinfonica de U.A.N.L. in Monterrey, Mexico. Sarah was a semifinalist in the 2004 National Flute Association Young Artist Competition and first prize winner in the 2005 Flute Society of Kentucky Young Artist Competition.

In 2008, Dr. Schettler joined the faculty of New England Music Camp, where she teaches flute lessons and music theory.