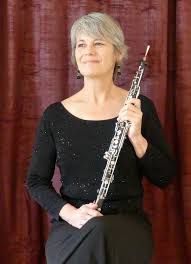 Oboist Kathleen McNerney has been hailed by critics for her “rich, full bodied tone” and “attention to the natural and enticing timbre of the instrument”. She is co-founder and Artistic Director of critically acclaimed, VentiCordi Chamber Music, which is entering its 12th concert season. VentiCordi, which presents concerts for mixed instrumental ensembles has been a primary focus of Kathleen’s passions.  Its innovative programming has been hailed in the press, with one writer exclaiming, ”My vote for the most interesting chamber music ensemble in recent years in Maine goes to VentiCordi."

Kathleen currently teaches oboe at Bowdoin and Bates Colleges and is the woodwind chamber music coach at Bowdoin.  She also teaches at the Portland Conservatory of Music and has a private studio. With over 35 years of teaching experience Kathleen has successfully guided students from ages 8 to 75 in the art of playing, reed making and performance. Kathleen has also coached the wind and brass sections of The MidCoast Symphony and the Bowdoin Orchestra.  Kathleen formerly held teaching positions at Azusa Pacific University, La Sierra University and Glendale Community College.

Kathleen has performed with many musical organizations from coast to coast. Since relocating to Maine, she has performed with the Portland Symphony, PortOpera, Bay Chamber Concerts, Portland String Quartet, Maine Music Society, New Hampshire Symphony, New Hampshire Bach Festival and New Hampshire Summer Music Festival.  Before moving to Maine, Kathleen lived in Los Angeles for 19 years. During those years Kathleen enjoyed a prolific and varied playing career, working in many regional orchestras. Additional playing experience includes opera, ballet, movie soundtracks, musical theatre, and performing with pop artists. As a soloist she has appeared with The Antelope Valley Symphony, The Orchestra of Saint Matthews, The Maine Music Society and The Portland String Quartet.

She was oboist for two woodwind quintets, Imbroglio and Calico Winds and recorded with both groups. Her recording with Calico Winds was praised in the Los Angeles Times as “proceeds from Bach to Zappa…projecting solid musical values all the way…crossed all the style lines and gotten away with it.”

Kathleen is a graduate of the Hartt School of Music, where she studied with internationally renowned soloist, Humbert Lucarelli.  She is received her Master’s degree in performance from University of Southern California. Further studies were with Allan Vogel, former Principal Oboe with the Los Angeles Chamber Orchestra and Carolyn Hove, former English hornist with the Los Angeles Philharmonic.