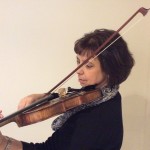 As Principal Second Violin of both Spoleto and Graz Festivals, she toured the U.S. and Europe before accepting a position as Principal Viola with the Whitewater and Sorg Opera companies.  While teaching in Richmond, Indiana, she hosted the 1991 Suzuki Talent Education Tour from Japan at Earlham College.

A former faculty member of the New England Conservatory of Music Prep Division, Newton Music School and the Levine School of Music in Georgetown, DC, she is a freelance violin/violist and performs with the Amadeus Chamber Orchestra, the Manassas Ballet and the American Festival Pops Orchestra at George Mason University.  She has maintained a private studio in Alexandria, VA for 22 years and has been a member of the NEMC faculty since 2004.