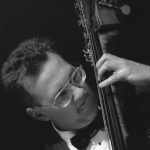 William Hones teaches applied double bass at Saint Mary’s College of Maryland and the College of Southern Maryland.  Previously, he served on the faculties of Shenandoah University, the University of Akron and Bowling Green State University.

Bill is the solo bassist of the Amadeus Orchestra, principal bass of the Arlington Philharmonic, member of the Signature Theater pit orchestra, and performs jazz and classic rock throughout the national capital region.  Previously he served 26 years as principal bass of the U.S. Air Force Strings, held principal positions in the Knoxville and Akron symphonies, and performed with the Detroit, Toledo, and South Bend symphonies.

Mr. Hones’ teaching draws from all major streams of double bass pedagogy with the goal of helping students build skills for lifetime enrichment.