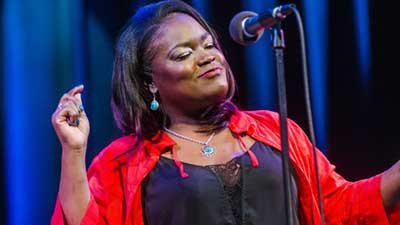 “Shemekia Copeland is a powerhouse, a superstar…She can do no wrong” –Rolling Stone

“Copeland provides a soundtrack for contemporary America…powerful, ferocious, clear-eyed and hopeful…She’s in such control of her voice that she can scream at injustices before she soothes with loving hope. It sends shivers up your spine.” –Living Blues

With a recording career that began in 1998 at age 18, award-winning vocalist Shemekia Copeland has grown to become one of the most talented and passionately candid artists on today’s roots music scene. Her riveting new album, Uncivil War, builds on the musically and lyrically adventurous territory she’s been exploring for over a decade, blending blues, R&B and Americana into a sound that is now hers alone. The soulful and uncompromising Uncivil War tackles the problems of contemporary American life head-on, with nuance, understanding, and a demand for change. It also brings Copeland’s fiercely independent, sultry R&B fire to songs more personal than political. NPR Music calls Shemekia “authoritative” and “confrontational” with “punchy defiance and potent conviction. It’s hard to imagine anyone staking a more convincing claim to the territory she’s staked out—a true hybrid of simmering, real-talking spirit and emphatic, folkie- and soul-style statement-making.”