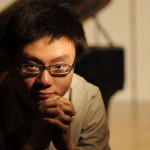 A dynamic and versatile pianist, Dean Zhang has been praised by The Miami Herald as “a powerful keyboard player” with a “smooth, fluid touch at the keyboard, bringing maximum expressiveness.” Dr. Zhang has been a featured soloist with the Canton Symphony, National Repertory Orchestra, New World Symphony, Southwest Florida Symphony, Tucson Symphony, and is the laureate of numerous competitions.

As principal keyboardist for the Omaha Symphony, Dr. Zhang performed with the orchestra in

more than 200 concerts and presentations during the 2015-2016 season. He held a fellowship with the New World Symphony in Miami Beach, Florida, and was invited for two

summers as principal keyboardist with the National Repertory Orchestra in Breckenridge,

Under the tutelage of Paul Schenly and Kathryn Brown, Dr. Zhang earned the Doctor of Musical Arts degree in piano performance from the Cleveland Institute of Music. Dr. Zhang also studied extensively with Joela Jones, principal keyboardist of The Cleveland Orchestra. He received his Bachelor and Master of Music degrees as a student of Dr. Theresa Bogard at the University of Wyoming. A devoted pedagogue, Dr. Zhang joined the piano faculty of the New England Music Camp in 2015 and has presented master classes at universities throughout the United States and China.