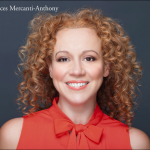 Frances Mercanti-Anthony is an actress, writer, director, teacher, and activist originally from Haddonfield, New Jersey. She has a BA in Theatre Performance from Fordham University, and is a graduate of the Upright Citizens Brigade Training Program.Frances earned her Actors Equity card in the Roundabout Theatre Company’s production of Mr. Marmalade in 2005.

She made her Broadway debut in the 2006 eight-time Tony award winning Best Musical Spring Awakening playing mother to Lea Michele and Jonathan Groff. Her numerous professional credits include the Broadway productions of Don’t Dress for Dinner, Cyrano de Bergerac, and the 2011 Olivier Award winning West End import Jerusalem, where she performed opposite the Academy Award winning actor Mark Rylance. In 2013 she accepted a position as the creator and director of the theatre program at the Philadelphia Performing Arts Charter School, a new grade 5-12 charter school in Center City Philadelphia. During her tenure there she designed the curriculum, taught acting and theatre history for hundreds of students, and directed 3-4 productions each year including musicals such as Disney’s Beauty and the Beast, original premiere works written by both herself and the students, and most recently The Laramie Project by Moises Kaufman and the Members of the Tectonic Theatre Project. In the fall of 2016 she began teaching acting at the Rutgers High School Musical Theatre Academy at Rutgers University in New Brunswick, NJ. She currently splits her time between NYC and Philadelphia, and she is thrilled to be spending her summer with the students and staff of the New England Music Camp.

“Louisa felt celebrated, nurtured and empowered! We love that the camp is "chill' and at the same time has a high level of musicianship and high standards.” -NEMC Parent, New York