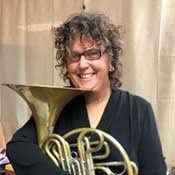 Susan G. Johnston has been playing the horn with great passion since she was 10, she started playing the piano when she was 8. Her favorite work is playing in pit orchestras for musicals which she has been doing since she was 14. Among her favorite gigs every year is playing the music of Gilbert and Sullivan for the CT Gilbert and Sullivan Society’s annual Operetta. Sue is a proud member of the AFM Local 285-403 and plays with or conducts for the Silver Cornet Band.

She graduated with a BS in Music Ed in 1984 and a Masters in Music in 1994 from the University of Connecticut where she studied horn with Bill Nemeth. Sue is a retired CT band director who taught grades 4-8 instrumental music in Norwich Public Schools for 15 years and then she was hired to direct 7-8 band for 8 years followed by 10 years as the High School band director for East Lyme Public Schools. One of the great loves of Sue’s life is community bands, she has played in or conducted them since she was 14 and is still very active with 2 bands in CT and 2 bands in FL. Sue was the conductor of the Noank Mystic Community Band for over 25 years, that band is like home to her and she enjoys playing with them to this day. Throughout her life she has been involved in many local music programs where she taught private horn lessons and assisted with ensembles. Chamber music is another important part of Sue’s life, she has played in many brass and woodwind quintets and has always taught chamber playing to her students. Another favorite pastime of Ms. Johnston’s is playing Klezmer, after she was introduced to Klezmer at NEAMC she joined a group, the KLEZMENCHENS, and has been having the time of her life, it is the most fun music she has ever performed. Sue is retired she plays as much as possible and has enjoyed attending the Florida French Horn Festival for the past few years where she has been able to meet and learn from some amazing players like Dale Clevenger. Ms Johnston retired in 2017 and has become a snow bird spending 7 months a year in Florida and 5 months in Connecticut. She was thrilled to be selected as the Guest conductor for the NEAMC in 2018, this is when she fell in love with camp and ever since then she hoped to some day be hired as the Horn Specialist and now that dream is realized. Beside a life full of music making Sue is also very active, she loves boating, surfing, biking, swimming, hiking, playing with dogs and painting with acrylic paints. Last year she was in her first surfing competition at 59, The Folly Beach Wahine, and she came in 5th out of 12 people in the body board division.