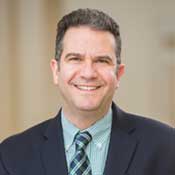 RichardE. Wyman is the former Assistant Director of the United States Coast Guard Band, where he regularly conducted throughout the United States and abroad, including historic concert tours of Japan and Taiwan. He led the Band’s educational initiatives; designing, hosting, and conducting innovative "Young People's" concerts for over 6000 students annually. Wyman also served as the Band’s producer for ten CDs and two White House “Pageant of Peace” PBS specials.

Dr. Wyman currently serves as the Executive Director of the Community Music School in Centerbrook, CT, conductor of the Noank-Mystic (CT) Community Band, and as Co-Director of Music at Noank (CT) Baptist Church where he leads the Senior Choir. He enjoys working with musicians of all ages, regularly appearing as clinician and guest conductor with a variety of school and honor festival ensembles. He has done extensive scholarly work on American composer John Adams, and has published on John Williams in Volume 10 (and Steve Danyew in Volume 11) of the widely-used reference book series Teaching Music Through Performance in Band. Wyman’s work as a saxophonist and chamber musician has earned two year-long residency grants from the National Endowment for the Arts, four performance visits to the White House, an appearance on The Tonight Show with Jay Leno and employment at Disneyworld, Busch Gardens (FL), and with assorted jazz and salsa bands. He holds a Doctorate in Conducting and Music History from the University of Connecticut, Master’s in Saxophone Performance from the University of Illinois, and Bachelor’s Degrees in Saxophone and Music Education from the Eastman School of Music. His primary conducting teachers have been Jeffrey Renshaw and Frank Battisti.