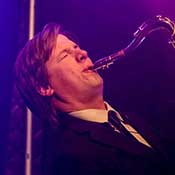 Saxophonist and live composer Dennis Shafer engages his audiences with animated performances using multimedia, theatre, costumes, and music. His playing has been reviewed as “brilliant” by The Boston Globe, and he is a passionate interdisciplinary artist. In his performance, he always seeks create a unique experience to intrigue audience about new music and performance art, enhancing live performances with visual and interactive elements.

As a saxophonist, Shafer has performed concertos with orchestra in Boston and New York City, and has premiered countless new works for saxophone and chamber music. His solo album Dennis Shafer and Friends features works he commissioned for saxophone and promoted on a world tour to Paris, Thailand, Hawaii, and California.

As a director, he conducts and composes with The Chagall Performance Art Collaborative (ChagallPAC), which he founded with his partner Diana Norma Szokolyai in 2008. Most recently, ChagallPAC created the Salem Festival of Light and Color in with projection art on the outside and inside of historic Old Town Hall in Salem. The performance also included an interactive music performance featuring new compositions by himself and composer Mark Popeney. ChagallPAC also hosts a venue on Artists’ Row in Salem which hosts over 100 performances a year, from classical music recitals to brass band and indy rock concerts.

As a teaching artist, Dennis Shafer is invited frequently to give workshops, masterclasses, and concerts at many places across the US, including the Boston Conservatory, the University of the Pacific (San Francisco), the University of Wisconsin (Whitewater), Salem State University and the University of Kansas, among others.  Dennis’ students have won many awards and performed in notable venues, with performances in Inman Square, Harvard Square, and Carnegie Hall in New York City.