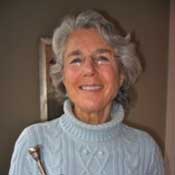 The summer after her freshman year she served as a counselor at NEMC. She finally got to Eastman, where she earned her music ed. degree, and began a long career in teaching in Maryland, then in the New Haven, Connecticut area.  After moving to Essex CT with her husband and two kids, she resumed her teaching career in Deep River, where she was Director of Music (band, chorus, related arts) at the middle school, and subsequently, Band Director in both middle and high schools.  She saw the need for individual study, so founded the Community Music School (member of the National Guild for Community Arts Education) in 1983.  She received a masters’ degree in trumpet performance the same year, from UCONN.  With the elimination of her teaching position in 1991 she moved to Greenwich, CT, and taught in the Scarsdale, NY, Middle School for 14 years.

Upon retiring in 2005, she returned home to the Ivoryton section of Essex and re-joined the Community Music School which, in her absence, had grown to 400 students of all ages.  The school now serves close to 500 students ages 6 months to 90 years.  She saw the need for an adult performing group, so founded the New Horizons Band of the Valley Shore.  A highlight of my involvement with New Horizons was working with the trumpet students at the inaugural New Horizons Band Camp at NEMC, which some of my local students also attended.