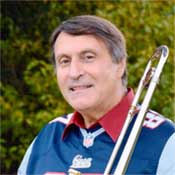 He has played and sung with countless jazz bands, rock bands, concert bands, orchestras, choruses, theater productions etc. etc. over the years. Steve has a Bachelor of Music Degree in Education from the Berklee College of Music and a Master of Music in Voice Performance from the University of Massachusetts at Lowell.