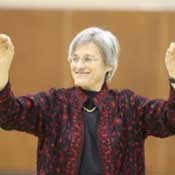 Diane Muffitt is retired from a career of thirty-eight years teaching middle school bands, starting in Eliot/South Berwick, Maine, and from 1980-2012, in Wayland, Massachusetts.  in 2008, she started Sudbury Valley New Horizons Music, a band for adults who haven’t played in years (decades) or who never had the opportunity to try an instrument.  SVNHM is thriving, now including a string program, with about 80 members, some having just started an instrument for the first time, and many of whom returned to their instruments after 40, 50 and even 70 years of not playing with ages range from 23-94!

Diane was counselor and assistant head counselor at New England Music Camp during the summers of 1970-1975 and will tell you that camp changed her whole life – for the better!  Anyone from the early years may remember her as an oboist and a counselor in UpDorm.  In later years, Doug Campbell turned her into a horn player – oboe and horn, a good combination for a young band director!  Now in retirement, she has a new musical love, playing euphonium.

Diane is passionate about helping others enjoy making music together, whether it be adult beginners hearing a band around them for the first time, or the more advanced players in the state junior district bands.  In her free time enjoys canoeing, birdwatching, photography, learning French, traveling with her wife, Linda, in their 1991 VW camper van and a myriad of other pastimes.