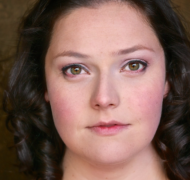 Shannon has studied at The American Musical and Dramatic Academy in New York City. She holds a Master’s Degree in Musical Theatre performance from the Royal Conservatoire of Scotland in Glasgow, Scotland. Most recently she has been seen as Penelopy Pennywise in the RCS production of Urinetown, and Helena in the original production of Willy’s Bitches at the Edinburgh Fringe Festival.

She keeps busy with performing with local theatres, The Good Theater in Portland and Bossov Ballet Theatre. Shannon has been nominated for several writing awards at the Strawverry One-Act Festival. Her most recent work, Willy’s Bitches was seen for a full run at the Edinburgh Fringe Festival. Her other roles consist of: Lady of the Lake; Spamalot, The Voice of The Dragon and Mama Bear in Shrek the Musical, and Yente and Golde in Fiddler on the Roof.