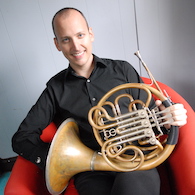 French horn player Stephen A. Slater is currently on a one-year appointment as Fourth Horn with the Virginia Symphony Orchestra and Assistant Principal/Utility Horn with the Harrisburg Symphony Orchestra.
Mr. Slater was most recently Second Horn (one-year) with the Richmond Symphony Orchestra and has kept solo engagements with the Blue Bell Symphony in Pennsylvania and Manhattan Virtuosi in NYC, where he has performed concerti from Mozart, Britten, Gliere, and Glazunov. Stephen was Assistant/Utility horn of the Jerusalem Symphony Orchestra, Guest Principal horn with the Israel Chamber Orchestra of Tel Aviv, and Substitute horn of the Israel Philharmonic Orchestra.
He has also performed as Principal horn of the Daejeon Philharmonic Orchestra, Third horn of the Macau Symphony Orchestra, and Second horn of the Boulder Philharmonic. Mr. Slater was Solo horn of the ensemble Tales & Scales, spinning music, story, theatre, and dance into over 200 ‘musictelling’ performances. He received a Graduate Performance Diploma at the Peabody Institute, a master’s degree at the University of Colorado, and undergraduate degree at the Manhattan School of Music. Instructors have included Denise Tryon, Michael Thornton, David Jolley, Richard Deane, Jerome Ashby, John Cerminaro, and John Zirbel. He was guest artist at the 31st Annual International Horn Symposium and grand prizewinner of the Sixth Annual Sister Mary Faustina Memorial Concert Competition in Marylhurst, Oregon.