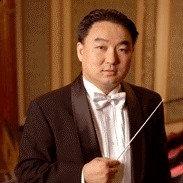 Originally from South Korea via Brazil, Joseph Choi is the Assistant Conductor of the Missouri Symphony and Music Director of the Missouri Symphony Youth Orchestra Program. Additionally, he serves as music director at Sunnydale Adventist Academy. Prior positions include Music Director of the Loudoun Symphony Youth Orchestras in Northern Virginia where
he developed into three different level orchestra programs.

Mr. Choi continued his graduate studies at the University of Hartford (Hartt School of Music ) with Maestro Harold Faberman and served as Graduate Assistant to Dr. Thomas Duffy. He began his DMA (Doctor of Musical Arts) program in Choral Conducting at the University of Maryland at College Park where he was full-scholarship Doctoral Graduate Assistant to Dr. Paul Traver and served as Assistant Conductor of both University of Maryland Chorus and Chorale where he sang as tenor soloist with Annapolis Symphony and Mozart’s Vespers of Confessore with University of Maryland Chorus. During this time, he was selected to serve as 2003 Prince George’s All-County Orchestra Director making his conducting Debut at the
Kennedy Center Concert Hall in 2003.